Concert review - Pete Pidgeon and Arcoda, with The Way Down Wanderers and Mama Magnolia

Sometimes, I think the hardest thing about playing music professionally isn't the hours of rehearsal time, nor is it loading equipment in and out. It's certainly not standing up in front of an audience and baring your soul. No, the hardest thing is to get those people there in the first place. Each of the three acts playing this bill at the Fox managed to entice a small cadre of fans to turn out, but most only stayed for their one band, leaving a lot of space in the hall. The performers all took it in stride, making the best of it, but there's no denying that a bigger crowd would have fed the energy for the evening. 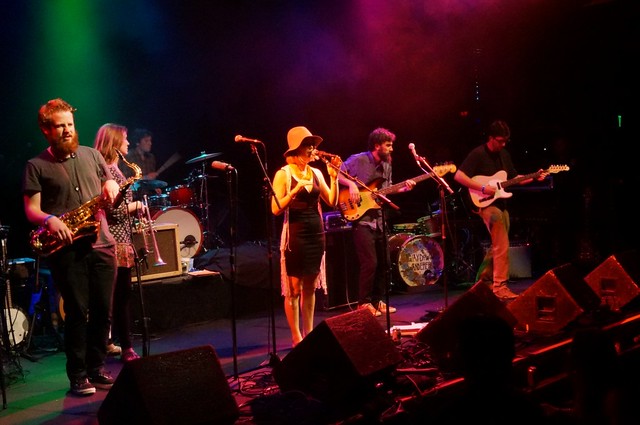 Preparing for the show, I was already familiar with Arcoda's sound and I knew that the Way Down Wanderers were a bluegrass band, so that set some expectations for the line up. Since, I hadn't come across Mama Magnolia before, I assumed that they'd fit in with that: sort of folky, maybe a bit country or bluegrass. Seeing the horns on stage pretty much put that idea to rest, and when they jumped into a jazzy soul groove, I felt the pull. 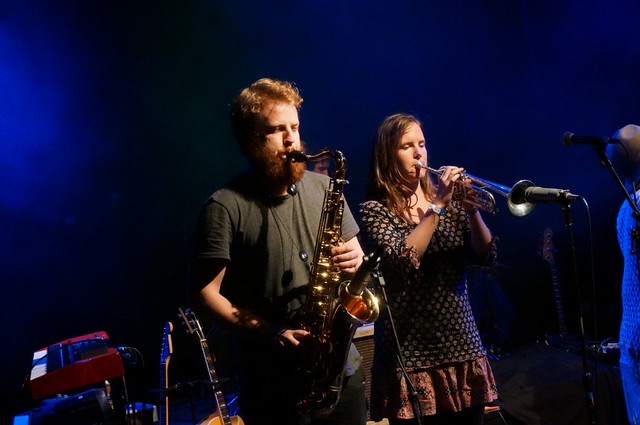 Despite the lazy sway on that first tune, it quickly became clear that the band was a crack squad of musicians. The horn punches fell perfectly into place and the solid rhythm section left plenty of room for ornamentation. Lead singer Megan Letts was great. Between songs, her stage presence was very unassuming but quietly confident. Before that first song began, she seemed a little mousy and shy, but it took no time to dispel that impression. Her vocal range was very dynamic as she dropped from full powered diva mode down into a softer emotional space, only to build the songs back up again. All the while, her gestures subtly supported the mood. During the instrumental breaks, she gave over to the music and danced along. 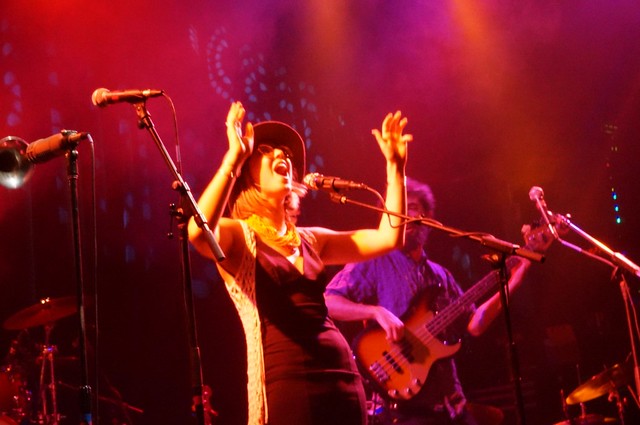 Letts was a strong front woman, but she didn't eclipse the rest of the band. The horns got plenty of chances to step forward as the set developed. Carrie McCune's trumpet riffs were particularly sharp, but Sean Culliton did a fine job on sax, as well. Later in the set, the songs brought in more funk rhythms and Zachary Jackson pumped up the party with his sharp bass lines. The last song they played wrapped up with a cool vocal ending that segued into a dreamy floating interlude, building and subsiding as they looped through the changes. This is definitely a band to catch live; their versatility introduced a good range of sounds from danceable funk to pop R&B.


The Way Down Wanderers 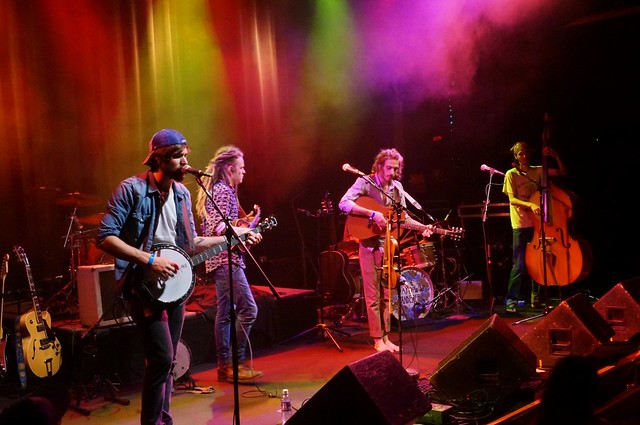 I never thought of Chicago as a haven for bluegrass pickers, but banjo player Ben Montalbano assured me that the city has a healthy, supportive scene, and it's diverse enough there that I'm willing to believe him. On their website, The Way Down Wanderers bill themselves as folk-Americana, but their set at the Fox was steeped in bluegrass, with a fair mix of modern folk and the occasional country twang. Instrumentation goes a long way towards setting that mood, with banjo, upright bass, and a tag-team fiddle and mandolin combo. 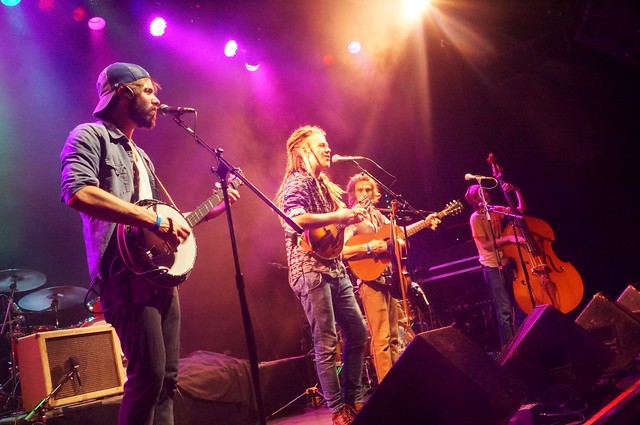 But more than that, the vocal stylings and tight harmonies were right on target. Guitarist Austin Thompson had a Dylanesque sound, reedy and nasal, but blending with the others, he could push the songs into that high-lonesome zone. It turns out that most of the band's front line could sing, and the vocal trade-offs meant that each of them got to share lead singing duties. 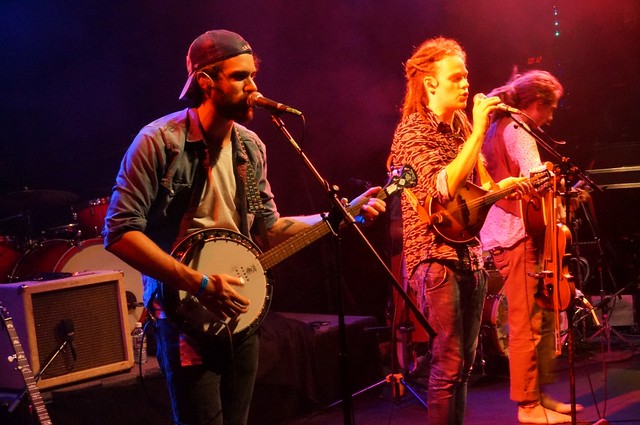 The Way Down Wanderers had a relaxed, friendly stage presence and a genuineness that resonated with the audience. Even though the venue was far from packed, the band had been out earlier at the farmers' market and had generated some local interest, including a group of Chicago transplants that were happy to reconnect with their home town. The music stayed fairly upbeat and the crowd caught the rhythm and moved along. 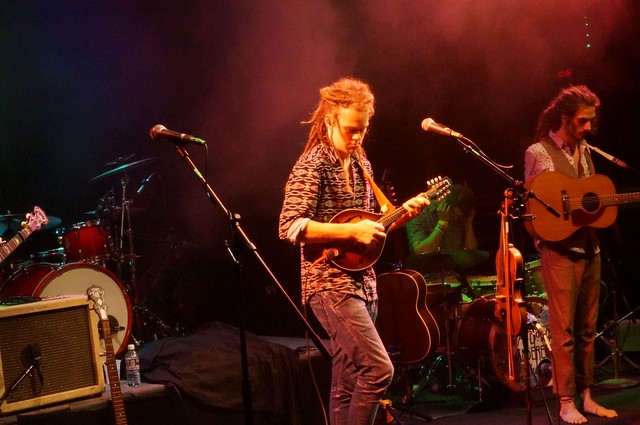 The playing was topnotch, but Collin Krause was the most impressive as he alternated between mandolin and fiddle. At one point, the band dropped out to give him some room and he tore it up on the mando, tossing off lightning fast runs as he developed his motif. When he hit his final note, there was just the briefest pause and then the song began with a vengeance as the whole band launched into the changes that Krause had just laid out. Krause may have stood out the most, but the rest of the band were no slackers. 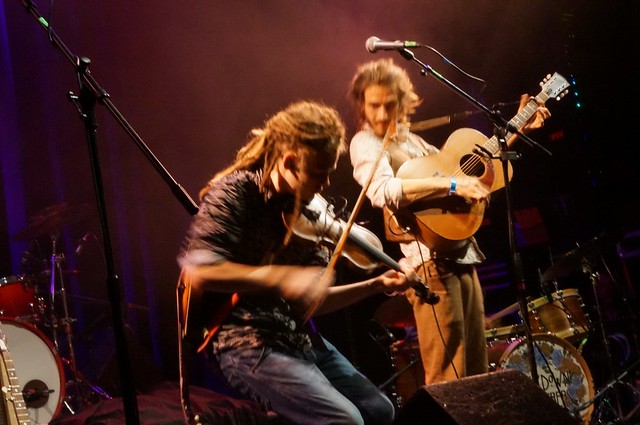 The Way Down Wanderers hit most of the songs on their new EP, Wellspring, Of these, my favorite was "Burn This City". Although the banjo and mando tied it to their core sound, they pushed the folky sound of the recorded version into a darker rock direction, driving to a speedy thrash ending that had the audience jumping along. "Circles" was a close second, drawing on a host of comfortable, familiar sounds like the Nitty Gritty Dirt Band and Ryan Adams' folkier material. 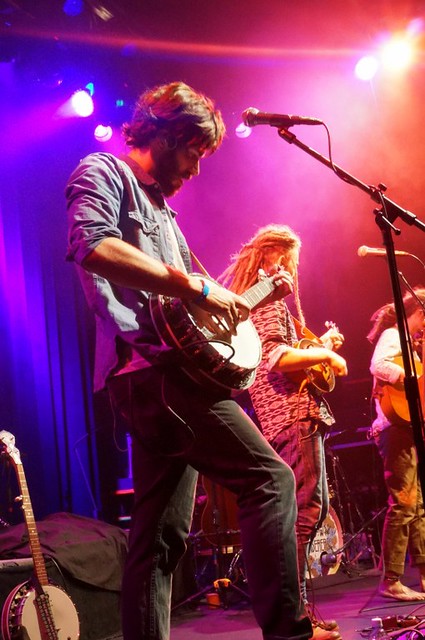 Within the relaxed bounds of folk-grass playing, the band still managed a number of nice unexpected treats, including a couple of surprising covers. The first was a treatment of "Someday" by the Strokes. A couple of tunes later, they introduced "a very sentimental tune," which turned out to be their ripping version of "I Want You Back" by the Jackson 5. The audience played their part and sang along. The band wrapped up their set with a strong take on the old standard, "I'm Sitting On Top of the World". The Way Down Wanderers' version was fairly peppy, taking it home with a big bluesy ending that tipped it's hat to Cream's reworking of the tune. 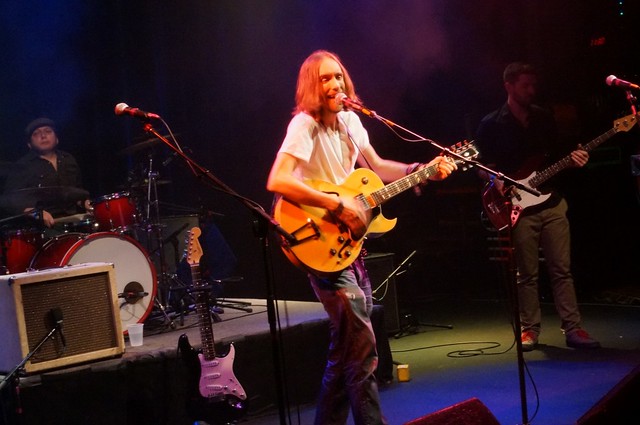 After seeing Pete Pidgeon and his band open last week's show for Atomga, I was excited to catch them as headliners. Where they were an outlier on the bill at that show, this time Arcoda straddled the two opening acts. Their retro 70's vibe and Pidgeon's soulful vocals fit with Mama Magnolia's work, and the main folky/Americana thrust was in line with the Way Down Wanderers' approach. As a bonus, the mix was a lot clearer, making it easier to hear everybody's parts. Both Pidgeon and keyboard player Adam Bodine had great lead chops and this time I could pick out both instruments. 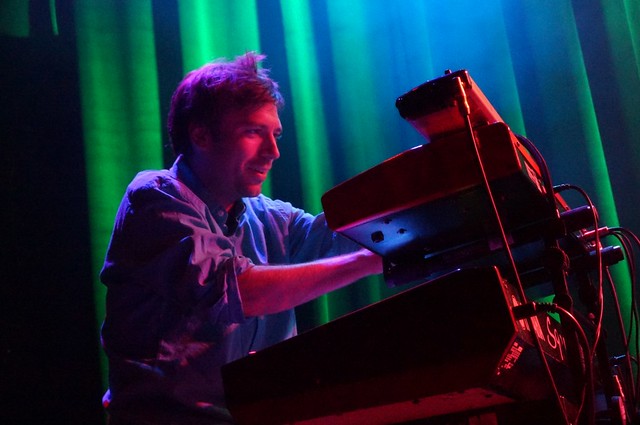 It was probably coincidental, but as Arcoda were completing their setup, the house music came around to a jazzy arrangement of Jimi Hendrix's "Little Wing". This provided a perfect segue for a very relaxed start. Pidgeon improvised along with the house music as they were getting their levels set, and then the band sidled into their first real song, playing some spacy, amorphous changes that fit well with Pidgeon's earlier noodling. The meandering keyboards and gentle swells contributed to a trippy groove before it coalesced into a soulful singer-songwriter arrangement, but still with a loose jam band vibe. That made the impact of the tight punches and breaks more powerful when they came. 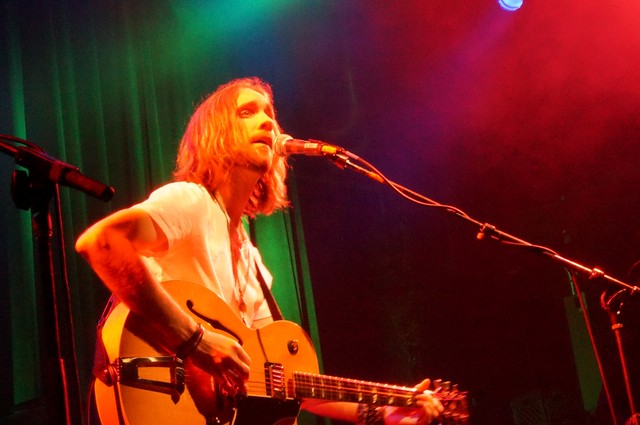 My first impression last week was that Pidgeon seemed fit to channel one of those early '70s folk-rock bands, but this show expanded on that with a wider range of material. Arcoda brought in some jazzier rhythms and retro tones that, along with Bodine's keyboard work and the band's polished arrangements, were very reminiscent of Boz Scaggs and also of Rickie Lee Jones. Pidgeon's voice was flexible enough to support all that and more. His ballads were especially nice. On "Growing Pains", his singing anchored the sweet, wistful music with a grownup wisdom and depth. 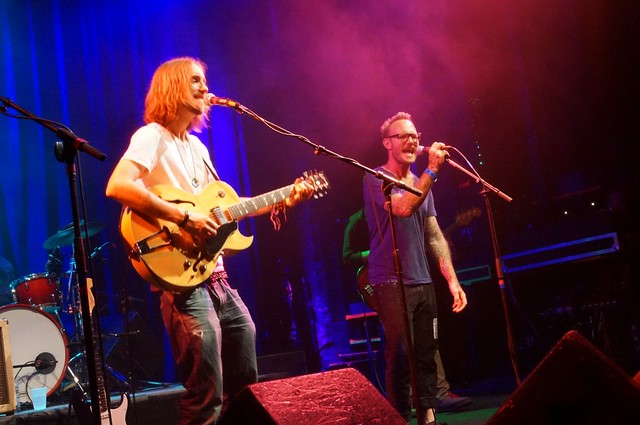 While the band did a fine job on their own, the evening included a couple of guest appearances that really deserved a bigger audience. Soul singer Dechen Hawk joined the band for a tune, and his voice was a perfect match for Bodine's Leon Russell style playing. Hawk and Pidgeon turned out to be birds of a feather, reinforcing one another and finding the emotional heart of the song. Later, local guitarist Peter Stelling sat in and added some great leads on his classic Gibson SG. In both these cases, Arcoda created a good match between their song selection and the guest artist, showing everyone off to their best effect. 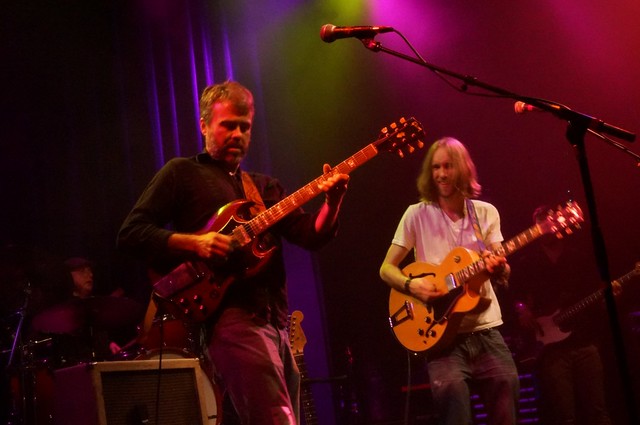 I'm not all that familiar with the band's originals yet, but there were two songs that really jumped out the most for me, maybe because they pushed the band to test their technical ability and generate some excitement at the same time. The first of these was "The Wind and the Lover", a funky number that could have been an outtake from Frank Zappa's Over-Nite Sensation. Bass player Nate Marsh locked in with Pidgeon on the tag riff and then settled into a foot-stomping, gut-bucket bassline. Jared Forqueran contributed to the fun with some wicked drum fills that made the chorus snap. The other high point was near the end of the set; it must have been the next to last song. I didn't get a title for it, but it was a jam band instrumental that started out jazzy, but developed into a monster tune that reminded me of Jeff Beck. While everyone stretched out here, Pidgeon's guitar work was the star attraction. Despite the late night and the poor attendance, this was an ecstatic celebration of shred. 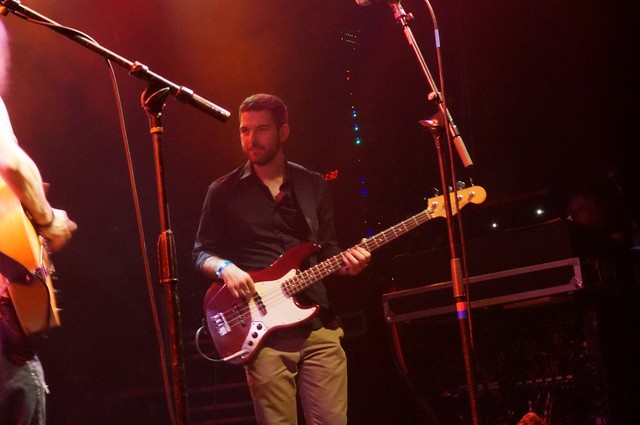 I'm sure the band would have appreciated a better turnout, but no one in the hall could complain about Arcoda's performance. Like professionals, they played like it was a sold-out show and they challenged us to be an audience worthy of that experience. 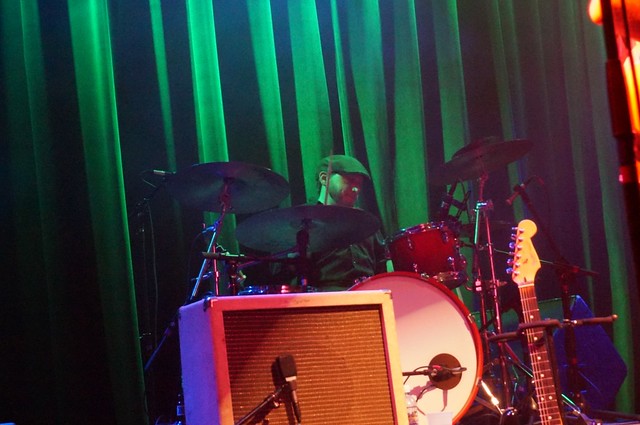 More photos on my Flickr.
Posted by Jester Jay Goldman at 9:03 PM