Concert lineups often make for strange bedfellows, but honestly, how many African-influenced, horn-intensive dance bands are knocking around Denver for Atomga to partner with? Okay, there are probably a few, but this bill opted for a potpourri of acts to build up the energy. For the most part, this worked out well. Atomga drew a big, supportive crowd, happy to move to the music. They've just released their new album, Black Belt, this week and this was a first chance for many of us to hear these songs live.

The Bluebird was an intimate setting for the show. The stage was a little cramped with band equipment and personnel, but the band transitions went fairly smoothly and quickly. Throughout the course of the evening, though, the mixes were far from ideal. The instrumental balance for the first two acts left some of the players seeming superfluous because their parts were so hard to pick out. Also the vocals were a bit muddy and indistinct for everybody. The audience had no trouble hearing the beat, though, and moving along. 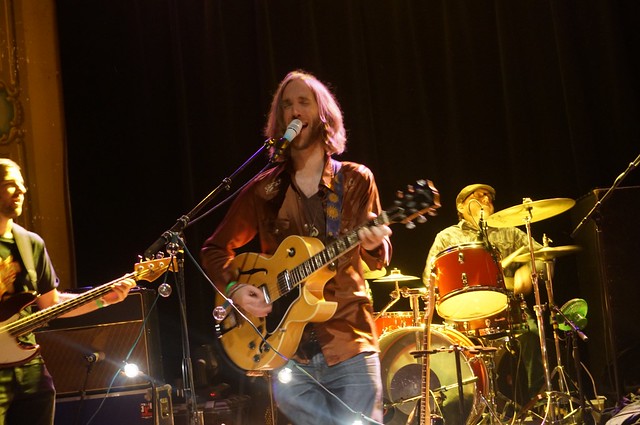 Arcoda might have seemed like the odd band out: their retro-tuned Americana didn't have any horns and they only had a paltry four members. All true, but Pete Pidgeon and his group proved to be the perfect aperitif for the night. Pidgeon looks like he should be heading up one of those early '70s California rock bands, like the Eagles. Their set didn't settle for a peaceful, easy feeling, though. While the first song was relatively laid back, his cover of Bob Dylan's "Tonight I'll Be Staying Here With You" got things going with a tempo that was more upbeat than the live Rolling Thunder Revue version. Adam Revell's keyboard work recalled Billy Preston's soulful accompaniment, giving the tune a funky drive. Pidgeon's tight pedal tone guitar lines were buried in the mix, especially by the fat punch of the drums, but when they shone through, they sounded great. 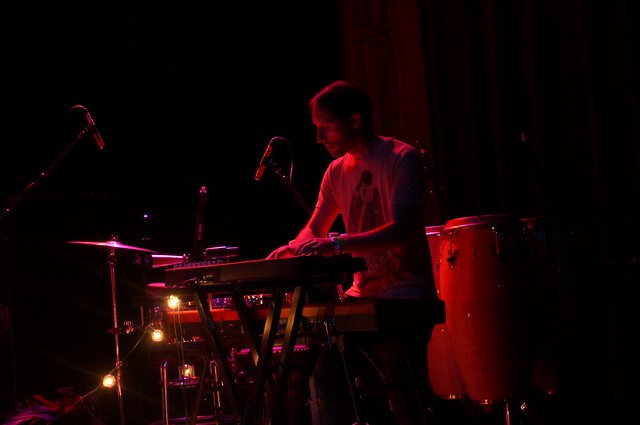 The band largely deferred to Pidgeon, letting his expressive presence take center stage, and he had the confident spark to own it. Aside from that Dylan cover, most of the material seemed to be original, and Pidgeon inhabited the songs. As he and Arcoda deftly handled the dynamic musical shifts, his body language choreographed the intensity of the songs. Even though this was a very different groove than we'd hear for the rest of the night, the band's tunes did find enough funky rhythms to fit in, even when they shifted into a more modern indie rock style. I look forward to catching these guys at another show. I know they're playing at the Fox in Boulder next weekend. 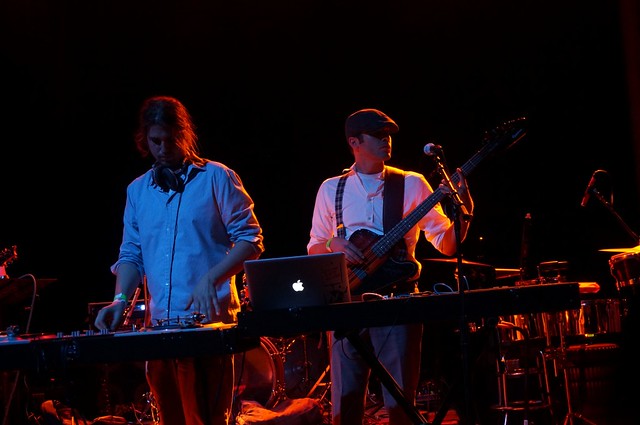 On the surface, Human Agency should have been a smoother fit on the bill. Unlike Arcoda, they had a horn section and their heavy drum beats tapped into a dance friendly space. Unfortunately, their set never really gelled and they lacked the stage presence to engage the audience. To be fair, it turns out that this isn't really the group's usual milieu; normally, they're an electronic dance trio with a pair of DJ/sound engineers and a live drummer. In that world, the shoegaze focus on the equipment would be perfectly fine. Incorporating the brass and a guest guitarist for this show provided some protective coloration, but the amorphous repetition couldn't hide that they were out of their element. 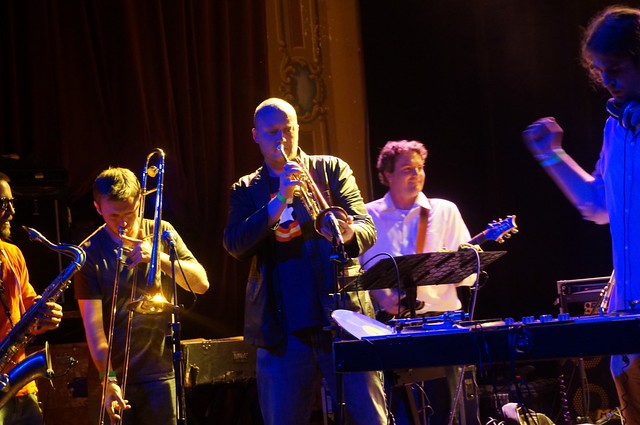 The side players integrated in fairly well, responding to signals so breaks and endings were tightly synched, but there wasn't enough structure to suggest more than just some horns jamming along to a pre-recorded backing track. The muddy mix did them no favors; the turntablist may have had more technique than a transformer scratch and a bit of chopping, but it was impossible to tell. Even the horns alternated between blaring and anemic. The drums were the only instrument that consistently stood out. The good news is that Jonas Otto was a phenomenal player. Locked into his own world with eyes shut and headphones tight, he nonetheless nailed every tag and dismount. 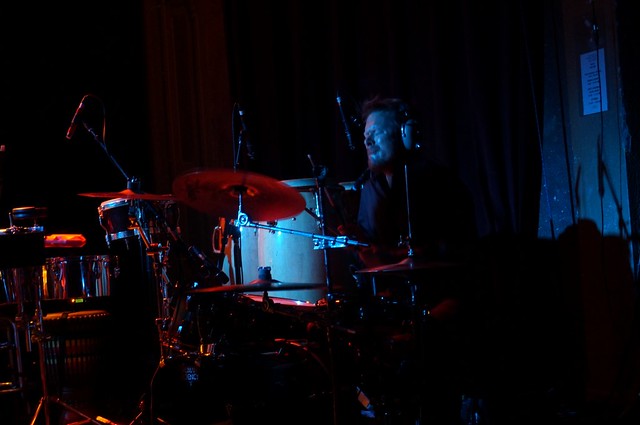 Listening to Human Agency's Soundcloud page, they do have some decent tracks. I recognized some of "Half Plug" from the show, but the recording had nuances that we couldn't begin to hear at the Bluebird. They did provide a buffer between Pete Pidgeon's set and the horn heavy sound later, but it proved to be more filler than filling. 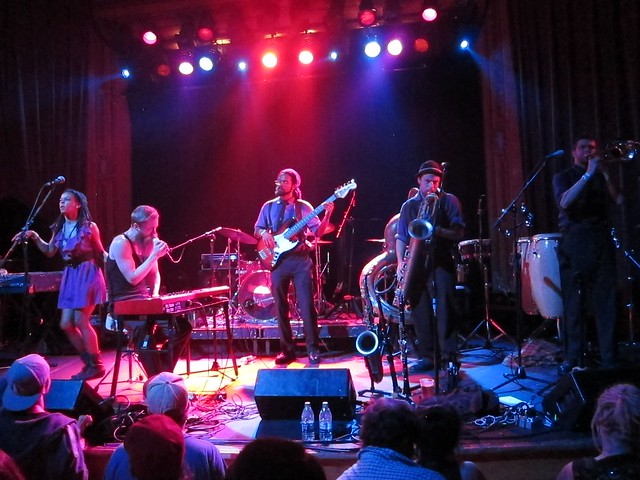 About five minutes into Dirty Bourbon River Show's set, I realized I was face to face with my newest performance nightmare: the thought of having to walk on stage after this band and their madcap circus dance music. Aside from being great players, all of these guys are very visual, with the king of the crew being frontman Noah Adams. Adams had a thick, scary beard that three mountain men could easily timeshare, but he was also one of the most electric performers I've seen in quite a while. His sense of showmanship and magnetic personality were almost unnerving. While he mostly played keyboards, he had a couple of surprises up his sleeve. including a pocket trumpet and a miniature soprano trombone, so we were never sure what else he might do. He and the band knew how to work the crowd up and manage their energy. 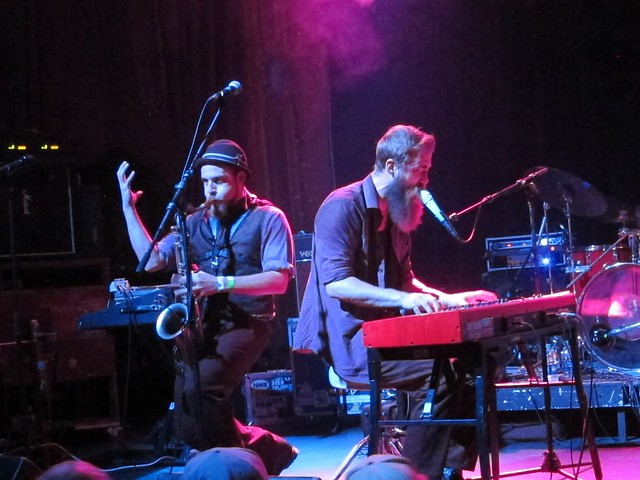 DBRS opened with the Eastern European gypsy jazz of their song, "Wolfman" and Adams embodied the character, taunting and challenging the crowd. This was a strong start, but he showed that he could bring that same intensity to a more serious tune on the drag blues of "Esmerelda" from their recent album, Important Things Humans Should Know. As the band wound their way from these sounds through Dixieland turns to funky grooves, the overall sense was a mix of Dark Carnival and danceable funk. Several times during their set, a couple of the players referenced "Entry of Gladiators" in their solos to cement that sense -- if you imagine a circus song, that's almost certainly the one you're thinking of -- but, despite the sardonic humor, DBRS was no novelty act. 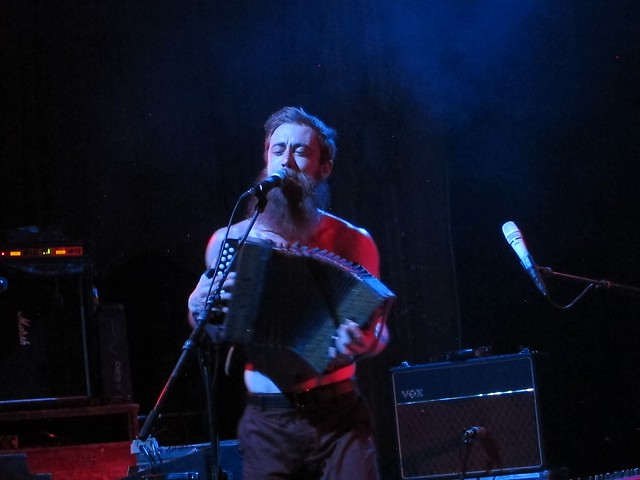 Instead, they're like a high quality party band pumped up to Major League level, but leavened with just the right amount of quirky weirdness to keep the audience off balanced and intrigued. Adam's rough growl was more than balanced by backing vocalist Sandra Love, who drifted on and off stage to add her seductively soulful voice as needed. Regardless of who was singing, though, DBRS was always swinging. The crowd's dancing and cheers were all the encouragement the band needed. 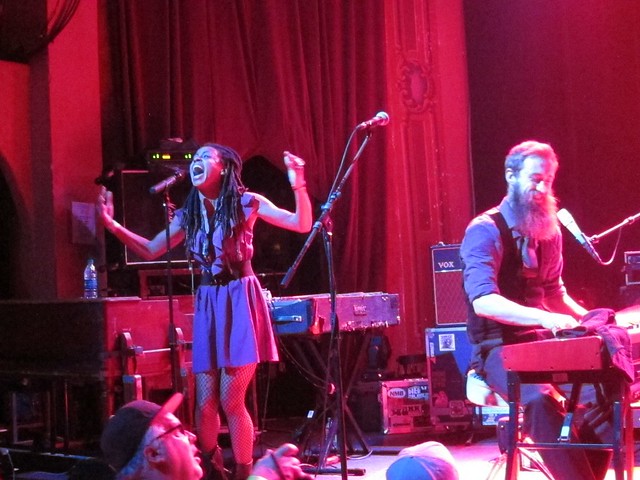 As much as I enjoyed Adams' musical romps from keys to accordion to trumpet, I was most impressed with their boss of the bottom end, Jimmy Williams. Williams divided his time between the electric bass and the sousaphone (and a one-off flute line). At one point, he muscled his way through a tight walking run of 16th notes on the sousaphone, maintaining the rolling rumble of bass notes without missing a beat or looking out of breath. Given that the band is from New Orleans and this was in the Mile High City, that was an impressive feat! 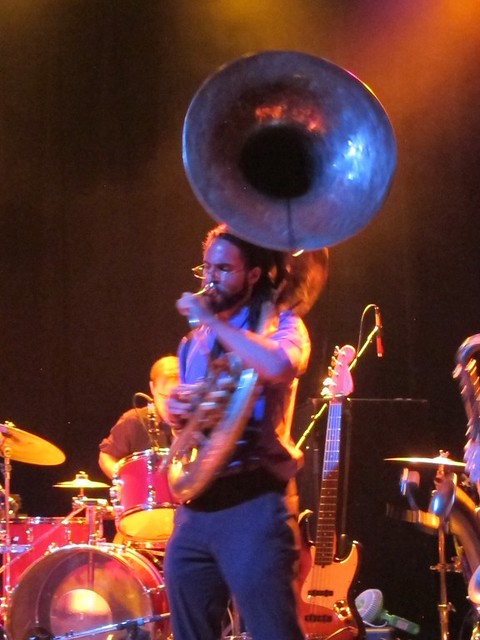 At the end of their set, after the flashy drum solo on a full kit and extension ladder, DBRS finally took it home with their last song, but even then, they sprung a twist. They dragged out the ending with a final loose meandering riff that suddenly transformed into a quick reprise of their opening tune. Adams is indeed the Wolfman, and we cannot stop him. 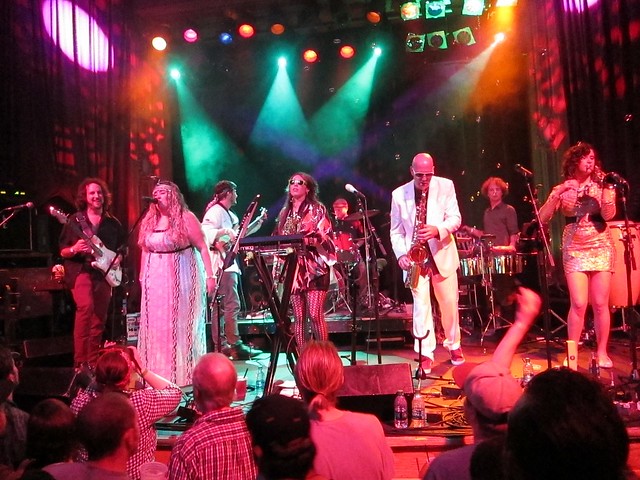 A lesser band might have worried about being upstaged by Dirty Bourbon River Show's manic set, but Atomga was unflappable as they set up for their turn. They were clearly excited to deliver the goods to the nearly sold out house. Everyone found their position on the darkened stage and, after a brief amount of preparation, a simple horn line coalesced into a steady vamp with everyone falling into place. In standard Afrobeat fashion, they took the time to assemble and set that groove until it became a foundation for wider exploration. This was actually a good model for the show as a whole, because the first several songs stayed on familiar ground before the group started digging into their new material. 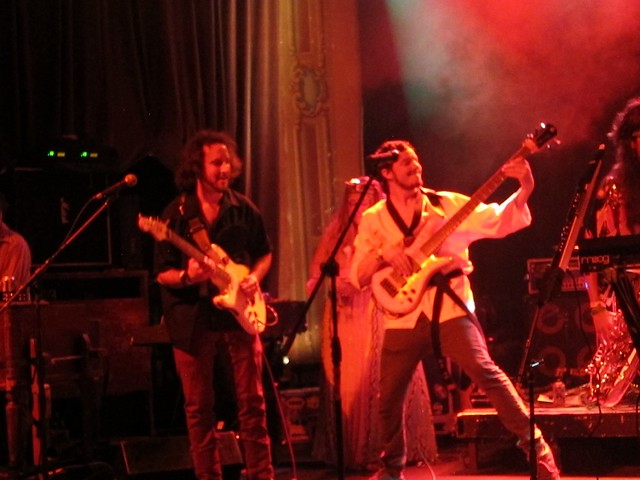 By the second tune -- "Empire", from their eponymous EP -- Atomga were playing wholly in the moment, finding that shared space were everything just flowed: Frank Roddy's hand offs to Leah Concialdi's baritone sax were effortless and natural, singer Kendra Kreie's voice was soulful with an iron core, and the drums and percussionists toyed with syncopation, inciting the crowd to movement. It's hard to identify the exact moment that it happens in a given show, but there's always a tipping point where it's not just music, but an invitation to hypnotic, ecstatic dance. 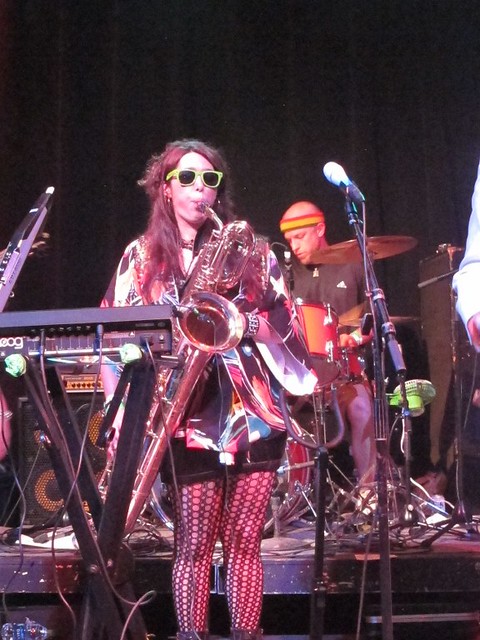 Atomga's dedication to the groove and to the joy of their music eliminated any sense of competition with DBRS or any of the other acts. As always, it's a treat to witness the band's interdependent yin-yang aesthetic: their arrangements are tightly coordinated, but it's just as important to them to have fun up there and leave room for improvisation. Roddy and Concialdi were focal points, as usual, but everyone in the band brought their own zest to the show, whether it was Alice Hansen's energetic trumpet riffs, Casey Hrdlicka ripping through a wah-wah driven minor key solo, or Peter Mouser's classic psychedelic organ work. 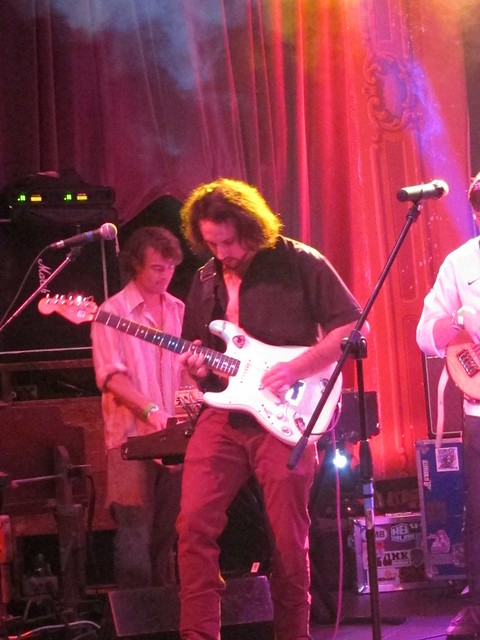 Everybody pulled their weight, but if there was an MVP for the night, it was Samual Lafalce on bass, who was amazing. Apparently in honor of the title of the new album, he wore a karate gi and black belt. Although he stuck to the back line, he put on his own show, mugging for the crowd with a melodramatic scowl (and twinkling eyes) and hamming it up with rock star poses. His campy pantomime was eye-catching, but it was even better to surrender to his expertly fashioned bass lines that locked into fine-tolerance perfection. His playing was central to setting up the backdrop for the rest of the band to work against, especially on the new tunes. 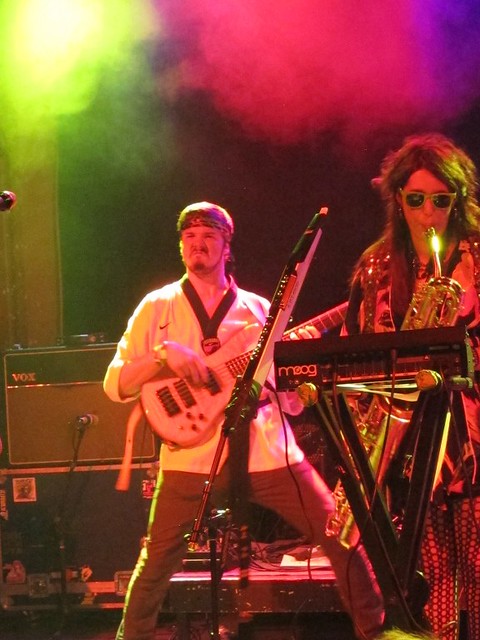 Speaking of the new album, the setlist included some real gems that I'm looking forward to hearing again. I think my favorite was "Sly Devil", which set up a kind of reggae groove with Hrdlicka's guitar swaying through the chords rather than hitting a straight chank. Lafalce's bass provided a subtle bounce as Roddy's lazy, meandering sax work wound over the beat, but really everybody had the chance to contribute key elements to the intricately assembled whole. Kreie's vocal line reflected the relaxed mood of the sax groove, but the challenging vocal mix made it hard to catch the lyrics in detail. What I could discern sounded political in a similar vein to "Empire". 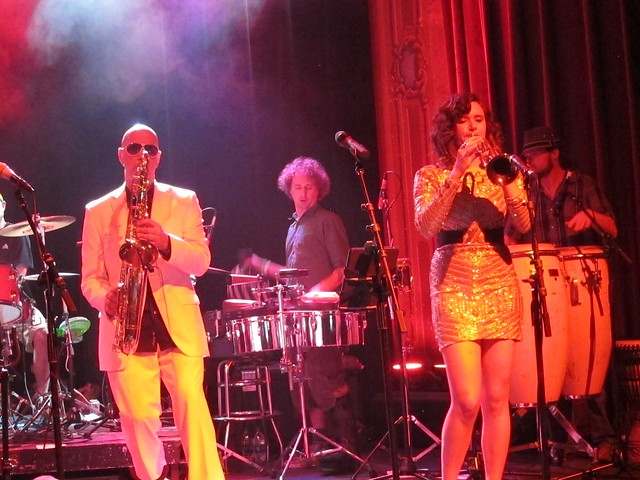 Aside from all the musical fun, Atomga also celebrated Black Belt's release with their own party clowns for this show. Their "bubble brigade" filled the hall and they also tossed inflatable beach ball creatures out into the crowd. The only thing missing from this baby shower was a diaper cake. Check back here soon for a full length review of Black Belt, but in the meantime, if you get the chance to catch Atomga, jump on it: they continue to be one of the best live acts in Denver. 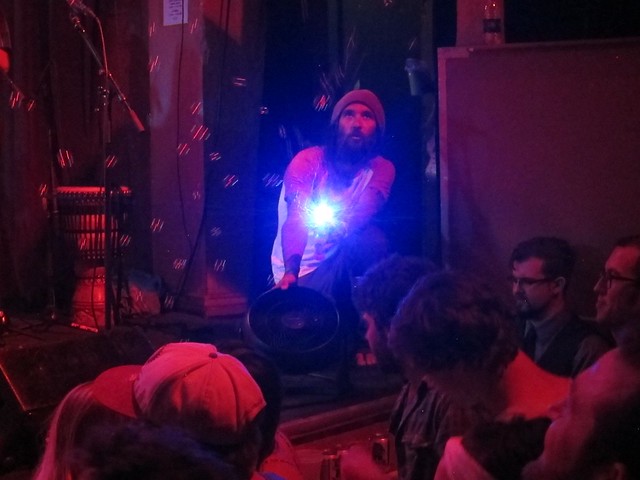