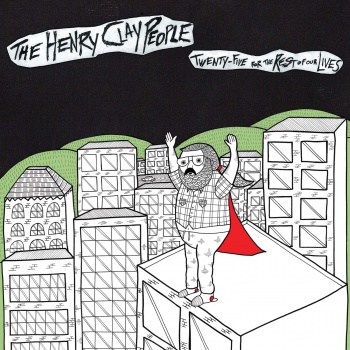 If albums are dinosaurs in these short attention span times, then the concept album is primordial. Retro psychedelic or overwrought progressive bands may exhume the format, but it's an old school play.

The Henry Clay People are all about the immediacy and punch of solid rock. On Twenty-Five For The Rest Of Our Lives, each song stands on its own with most of them clocking in under three minutes. But the band threads a common theme through the tracks, creating a Zen koan of a concept album: the coherent message is there, but it's almost an aside.

Like Jethro Tull's Too Old to Rock 'n' Roll: Too Young to Die!, the Henry Clay People find themselves facing the developmental crisis between their undisciplined youth and the prospect of boring adulthood. Jethro Tull's title track is somewhat morose, although it tacks on a happy ending. By comparison, Twenty-Five is more nuanced as it offers a deeper view of the question.

On 25 For The Rest Of Our Lives, the Henry Clay People capture the grown up frustration that comes from an undirected teenaged rage. They recognize the futility of holding on to an irrelevant past:

Joey Siara and the band skip the "holy crap, are we supposed to be adults now?" phase of this developmental crisis and dive into the "now what?" phase. They're looking for a meaning or a path, but they retain enough attitude to maintain some standards: "Now we've got to settle down? We don't settle for anything!"

Twenty-Five explored the idea, like a tongue probing a sore tooth. The band reminisces over the past, but with a clear eyed recognition. The Fakers calls back to their youth and what they overcame, but admits that "one was a faker, the rest of us were fakes".

But where are they now? Over the slashing Ramones beat of Every Band We Ever Loved, they take down the whole indie scene, starting with themselves:

No more room for romantics, I want to be a machine
I been sentimental, got no memories
You gave us nothing to do, and so we did nothing
Nothing sentimental, no more memories

By the time they reach Those Who Know Better, they're philosophical. The dreamy, tremolo-soaked sound is distant. Even when it rouses into energy, it remains muffled.

The message is fatalistic, but the Henry Clay People don't sound like they've quite accepted that wisdom they were offered.

The best part of Twenty-Five For The Rest Of Our Lives is that you can ignore the concept arc and just enjoy the music. The Henry Clay People still stir up a mix of classic cock rock strut, Ian Hunter's glam rock frantic energy, and smooth pop vocal veneers. They may be growing up and reevaluating, but some things never change.