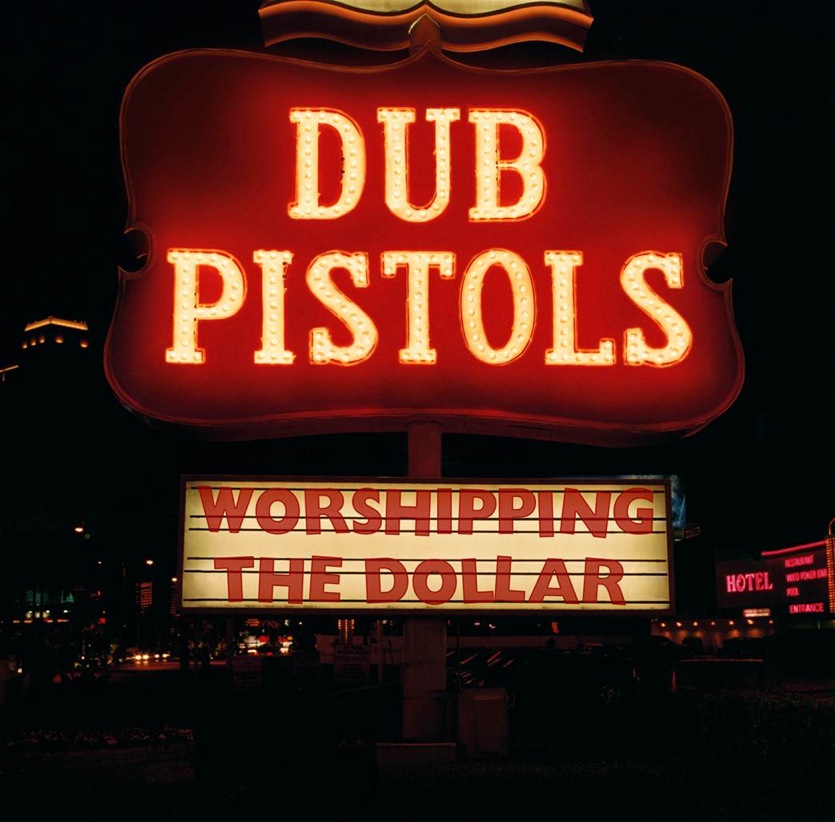 Back in the early '90s, Jungle brought reggae and dancehall elements into the rave scene. Within a few years, drum and bass evolved and moved on to wider sounds. Barry Ashworth and Dub Pistols call back to that era, mining the jungle sounds and updating it. On their latest, Worshipping the Dollar, the band offers a cool mix of ska, dub style reggae, and hip hop that's been mashed up with drum and bass to satisfy a clubby, pop-centric ear.

Things get deeper with the next cut, West End Story. Hip hop artist Akala gets socially conscious over a backing track reminiscent of 10cc's Dreadlock Holiday:

What is the cost of freedom and who pays it?
Is the world not one big slave ship?
Where some stood whipped and stripped naked
All your freedom is written in your pay slip

Worshipping the Dollar takes its title from another line later in the song. Akala's message rides on a smoothly flowing delivery. The music is nicely layered, with cool funk touches and samples extending the reggae groove.

Dub Pistol's formula of bringing in guest artists gives each of the tracks a unique personality, from the poppy sheen and heavy rap of Rock Steady to the dancehall-meets-Latin-bop of New Skank But my favorite is the skanking soul of Bang Bang. Kitten and the Hip get slinky over a TwoTone ska jam. It feels lightweight compared to the socially conscious themes on some of the other tracks, but it's clever and fun:

You and me, we've got no future
Truthfully, I'd love to shoot ya
Bang bang, you're dead
Take a bullet in the head
Got to say I never felt better
I could shoot you a million times
Punish you for all of your crimes
But you wouldn't ever get deader

The only thing I would have liked better if the taste of dub step from the intro could be mixed in and out during the track to push the genre bending vibe.

Worshipping the Dollar sounds fresh even though this is a vein that the Dub Pistols have been working for some time.
Posted by Jester Jay Goldman at 12:01 PM