Can a true partnership be bigger than Kanye's ego? 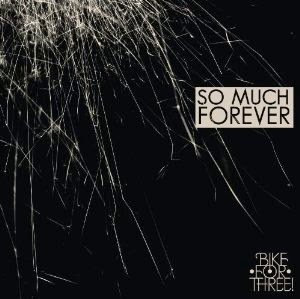 Sometimes, it seems like hip hop has become a kind of musical cilantro or bacon. It’s the hipster ingredient to add to any tired or bland project to give it a spark of relevance. Mashed up the other way, pairing a rap delivery with an unexpected backing track (Classical! Country!), the juxtaposition usually serves as an ironic in-joke. It’s not really even clever anymore, and I’ve gotten tired of strained cross-breeding that tries to pass itself off as creativity. Which brings us to Bike For Three!, the unlikely partnership between rapper Buck 65 and electronic producer Greetings From Tuskan (Joëlle Lê). Their story follows a Hollywood anti-pattern; let’s call it “not-meet-cute.” The conceit is that the rapper and the Belgian producer connected on MySpace (cue the endorsement ops), but have never met in person, despite collaborating on two albums now.

Buck 65 has always favored more unusual backing tracks, so Lê’s electronic grooves fall well within his abstract M.O. The surprise is that the two have created a unique fusion that reflects a balanced dynamic between their two worlds. Their latest release, So Much Forever, is no mere gimmicked mashup; it’s outsider hip hop that pushes creative boundaries. Rather than grafting one approach onto the other, these two artists bring each of their own worlds together, and neither one truly dominates. The tracks reflect a mutual respect and openness; together they accomplish things that neither could achieve alone. An album like this stands in direct contrast to a project like Kanye West’s Yeezus. West is a self-proclaimed genius, and while he fished around for ideas to flesh out his creative vision, there was never a doubt that every provocative piece of Yeezus was part of his overarching plan. Bike For Three! is less interested in making their audience prove their love than in challenging one another. Lê’s electro-pop dreaminess makes the tunes float while Buck provides the grounding. His emotional honesty rises to the top, but then her ethereal vocals, mostly in French, can transform the songs to find a more objective perspective.

The give and take keeps either voice from drowning out the other. Buck often syncopates his flow to augment the solid beat of the backing track, but Lê in turn takes his vocals and mutates it into more fodder for the mix. Exotic and solid, organic and electro-mechanical, tight with tension and freely floating – the dynamic balance holds your attention for the whole duration.

The album eases into view with a gentle, ambient track, appropriately titled “Intro”. The calm heartbeat and soft washes provide little preparation for the slick armored sound of the first real song, “Full Moon”, which is built on a foundation of Berlin-style synth pop. The steady pulsation creates a delicious tension. The pair sets up a cool trick they’ll use throughout the whole album, alternating Lê’s softly-echoed feminine vocals with the harder edge of Buck’s tightly wound male bass. The tagline, “Who can sleep, at a time like this,“ repeats, evolving from simple observation to indignant accusation before Lê mutilates her sweetly floating vocal line and moves the song into a more modern glitch electronica.

That caught my ear, but a couple of songs later, “Heart As Hell” sealed the deal. Built on a thoughtful, electro-pop base with tentative brushes of reverberating piano, the initial singing is distant and dreamy, more of a memory than a lead line. Buck’s lyrics are somber and emotionally bare, “I have two hearts and one of them is hard as Hell.” His imagery is beautifully economic, fitting a lot into the tight rhyming runs: “It’s vertigo in reverse/ Devoted and cursed/ It hurts/ Exploded and worse.” A ratcheting drumbeat clicks like the clock ticking away his time. The second verse flowers into a longer series, maintaining flow and rhythm, relentlessly checking off an inventory of dissatisfaction. It culminates in a bitter, “Sometimes the mind is paradise/ And the heart is Hell.” At this point, the production processes Buck’s voice and blends it into the electro substrate. The constant see-saw of “heart” and “hard” creates its own ambiguity. The moodiness ripples across the remaining tracks.

“Heart As Hell” proved to be my favorite track, but there are plenty of other strong contenders. The motorik drive and introspective lyrics of “Ethereal Love” make it a standout tune. “Stay Close Until We Reach The End” is also compelling as it builds on a droning start with creepy shards of disquiet as Lê’s chopped and damaged vocals page through a catalog of despair française, “Désillusion/ Fatale/ Tragédie…”. When Buck comes in with his precisely off-kilter delivery, the disturbing quality deepens.

By the time So Much Forever closes on “Outro” and its faster heartbeat, it’s impossible to say which of the two collaborators is figure or ground because the contributions are so interdependent. Bike For Three! may not be as confrontational as Kanye’s Yeezus, but it’s just as strong an artistic statement.