Contemplate the infinite through electronica and progressive guitar shred 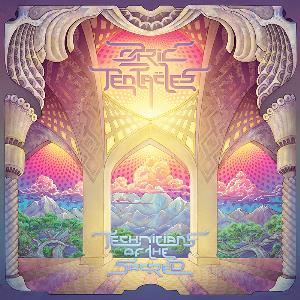 It’s a short attention span musical world,where the emphasis is usually on tight pop expressions. But while mere gestures are enough to satisfy most consumers, there are still some genres that need the maneuvering room of a full album to develop their ideas. In the four years since Paper Monkeys came out, space rock stalwarts Ozric Tentacles apparently had so many inviting trails to explore that even that was too confining . Their latest release, Technicians of the Sacred, sprawls out over two full CDs. Despite the obvious excess, there's not much in the way of fluff: while the songs take their time to find their target trancelike moods, they never fall into monotony. Longtime fans will find plenty of familiar ground, but the emphasis is on electronica punctuated by Ed Wynn’s shred-tastic guitar.

Disc 1 leads off with “The High Pass”, which takes an eight and a half minute nomadic trek through many of the sonic environments that the Ozrics enjoy the most: underwater dives, expansive vistas, evocative action zones, and spelunking trips deep down into the heart of the machine. The dynamic flow accommodates both incremental transitions and freefall plunges that reset the context. The tune wanders from chill electronic grooves to mind-warpingly intense prog-rock guitar, but the anxious rhythm and pensive funk bass line remain more or less constant. The restless electro energy may form the foundation, but there are plenty of distractions that provide ear-catching details that vie for the listener's attention, from blooming synth melodies that shift and grow to a robotic interlude that would be perfect for popping.

The music that follows could be soundtrack excerpts from a randomized set of dreamscapes. The Krautrock infused “Far Memory” seems fit for an underwater world, full of echo and frequency shifted shimmers, while the electro-pop “Changa Masala” has an infectious syncopated rhythm that suggests sleepwalking through a Bollywood set as it melts away into space. The imagination can run wild in these intriguing snow-globe worlds. The band dives into each with enthusiasm and little worry for how the songs might evolve. So a cheery electronic piece like “Zingbong” might start with an uptempo New Age feel, propelled by a busy gamelan synth run and terse bass line, but the Ozrics are content to let a Zappa-esque guitar periodically warp the piece into an off-kilter jumble, knowing that they can always nonchalantly slip back into the clarity of the main riff.

The second half of the album gives freer rein to the band’s progressive rock side, with plenty of energetic guitar mutation and distortion. This disc begins with my favorite track on the album, “Epiphlioy”. The Beats Antique style world-tronica groove is built on a galloping Middle Eastern dervish rhythm that’s intricately tied to a synthesized sonic palette. Like the evocative pieces on the first CD, the song suggests a series of images: a tense chase with an undercurrent of excitement, a visit to a nomadic camp in the desert, a spaced-out psychedelic trip in the middle of an oasis. It’s easy to get lost in the drawn out narrative of the piece, but the exotic tone, along with the touchstone rhythm guitar part, provide grounding enough for the extensive 12 minute sojourn.

By the time we reach the final cut, “Zenlike Creature”, it’s been a long disorienting trip. We’re ready for the centering focus of looped interlocking patterns, but even here, the meditative flow gives way to a more progressive groove. The track see-saws from thoughtful to assertive, eventually picking up an Alan Parsons style momentum. Despite the dynamic give and take, though, there is still a kind of imperturbability at the root of the song. It's as though the band is saying, "Ignore the illusion (māyā) and just settle into the moment." The macrocosm of Technicians of the Sacred reflects this message as well. It never delivers a clear mythology or answers. Instead, it just offers a hypnotic zone to contemplate the infinite. Or not, as you see fit.