Time again for the monthly singles post. Here are a few things that blipped my radar this month, starting with one of my Seattle faves, Macklemore. 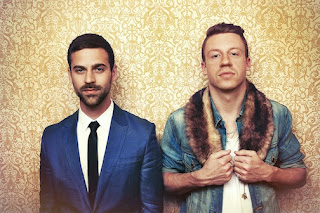 Photo credit: Greg Nissen
Macklemore is one of my favorite performers because his front and attitude balance perfectly with his earnest delivery. This makes him very entertaining, but his material is always solid. Search my blog for album and show reviews.

In recent years, the rapper has teamed up with producer/DJ Ryan Lewis. Lewis has been integral to polishing Macklemore's sound by creating musical accompaniments that extend the songs. His pacing on Wings is great. The simple, soulful piano sets up Macklemore's open delivery. Then the music builds tension as the vocals pick up intensity. Later, Lewis' strings evoke the emotions without getting schmaltzy.

The theme is a familiar one for Macklemore: a heartfelt connection to his something of his youth and his ambivalence between how the kid sees that thing and his grownup response. In this case, it's the Air Jordans that fueled his dreams and the baggage around them:

Look at me, look at me, I'm a cool kid
I'm an individual, yeah, but I'm part of a movement
A movement to only be a consumer, and I consumed it
They told me to just do it, I listened to what that Swoosh said

The lyrical flow shifts tempo and ranges from sentimental to indignant. Regardless of whether he connects with your youth, Wings sets you up for a big shot of empathy.

The long track (eight and a half minutes) bounces through several modes but maintains coherence. The first section ties some angular Pavement guitar lines to a poppier indie rock groove. This transitions into a drifting interlude on a sea of chaos. Somewhere along the line, the chaotic noise engulfs the track, somewhere between psychedelia and experimentalism. Rifle Eyesight recovers with some jangled guitar lines to take us back to the indie rock roots. The song ends in a modern psychedelic haze.

Despite the length, Rifle Eyesight stays engaging and interesting. If this is representative, Lenses Alien should be an epic listen.

With layers of low-fi simplicity, Veronica Falls creates a wall of sound like Phil Spector producing the Velvet Underground. Their shoegaze friendly song moves from comfortable to cheerfully excited, like spending a lazy afternoon with a lover and then getting a wild hair: adventure's afoot.

Come On Over is anchored in repetition, but the lack of lyrical depth creates an emotional conduit and evokes a happily reminiscent feel. All with a toe tapping beat. It works for me. Even after it's over, the mood and melody linger.

Veronica Falls has more tricks in their bag. Earlier singles Found Love In a Graveyard and Beachy Head offer their own flavors of shoegazy garage, hinting at darker brooding and surf sensibility. October's not too long to wait to see what else Veronica Falls has to offer.
Posted by Jester Jay Goldman at 4:00 PM