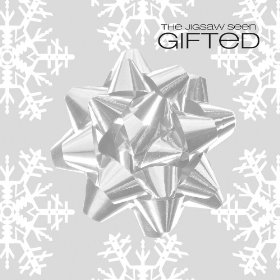 The Jigsaw Seen continue to be the best holiday band for people that hate holiday music. Their droll take on Christmas and thick, polyurethane-coated sense of irony form their appeal even as they undercut the effect. The band's versatile musical approach is their saving grace. Last year's Winterland (review) featured some fine indie pop draped with psychedelic tinsel, recalling XTC's quirky pop masterpieces. This year, Gifted references that sound but adds a strong folk rock sound as well as a wonderfully obscure David Bowie cover.

The new album was a direct outgrowth of the previous one. The original plan was to record a couple of bonus tracks to add to a reissue of Winterland. Instead, the band recorded a few extra tracks, maybe enough for an EP. One thing led to another and the project grew into a solid companion album.

Clever lines and lyrical ideas abound. At their weakest, the humor wears thin, such as "The More You Change", which blindly asserts the obvious, "The less you stay the same." On the other hand, "Christmas Ain't For Christians (Anymore)" pushes that boundary and comes out the other side. Its initial lines lay down some well turned phrases:


The old man took a turn
For the worse in ICU
That's not a place I'd want to be,
For all the good they do

The song juxtaposes the tropes of aged wisdom and philosophical dying words with the contradictory conceit of the title to create an absurdist parable. The folk rock backing has just enough self-indulgence to buoy lines like, "Schoolrooms ain't for thinkers and barrooms ain't for drinkers" and Dennis Davison's deadly serious delivery push the track into full on camp. The joke might have proven to be too heavy handed for the song to support, but the arrangement leavens the effect. The acoustic guitars are sweetly layered over a delicate mellotron figure in folky perfection.

"Open Up The Box Pandora" is another fine bit of playing. Grungy guitars thrash over a driving Bo Diddley beat and rolling bass line. Davison's lyrics don't offer a deeper allusion to the myth than mentioning Pandora and a box. Instead, the singer is anxious to see how his gift is received. But once again, the music carries the song with sprightly energy. Catchy moments like this make Gifted worthy of repeated listening.

The band's cover of "Sell Me a Coat" manages to capture a stronger sense of Bowie's sound than the original does. The song comes from Bowie's debut album, which offered a strange mix of styles. The Jigsaw Seen take the theatrical tune and add the kind of glam trappings that a later period Bowie might have brought to it. Davison's voice recalls Colin Moulding (XTC), but the arrangement owes more of a debt to Mott the Hoople.

While most of the songs on Gifted tie into the seasonal theme, it's less of a commentary on the holidays than Winterland. "Rise of the Snowflake Children" is merely the title phrase over a psychedelic interlude of droning guitars, for example. But the music seems to capture the flavor of winter, whether it's the pensive progressive rock of "Pretend It's Christmas", the dark Gordon Lightfoot folk of "Hag of the Barren Trees", or the retro '70s jazz vibe on "Couples Skate". This nomadic journey across genres reflects the band's organic approach to recording Gifted and marks the Jigsaw Seen as one of the most interesting group of musicians around.
Posted by Jester Jay Goldman at 12:00 PM