Psychedelic flavored pop captures a larger sense of the season 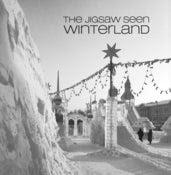 I am not a fan of Christmas music - the withered sonic cliches that overstayed their welcome even in my childhood, the schmaltzy sentimentality - it all just rubs me the wrong way. If Winterland isn't a perfect antidote, it's still a breath of fresh air. The Jigsaw Seen keep up their trippy pop sound while visiting a number of holiday inspired themes.

Winterland works because the band captures a more honest sense of the season, for better and worse. The Jigsaw Seen's take on the holidays is ambivalent: hopeful for good things, but shaded with loss and the stark chill of the season. While the songs do share a sense of winter and Christmas, this isn't really a true concept album.

They open with What About Christmas, whose curmudgeonly narrator stews in his resentment over a relationship that's already over by May:

The driving psychedelic groove supports some sweet Arabic minor key fills low in the mix. The rich sonic spread is full of complementary parts: the treble chime of acoustic guitars, the grind of electric guitar punches, and the serene vocals. It's a great start to the album.

As soon as Candy Cane started, I had a flashback to XTC. The guitar arrangements, harmonies, and the arch lyrics could be an outtake from Oranges and Lemons. Like XTC's bittersweet pop, Candy Cane lays out overtly bitter lyrics about the holidays against a pretty pop sound. Lines like, "Christmas morning, basic black/The grim reaper of yuletide cheer is back" are dark and clever, but lose some sting against the jangled bounce of the paired acoustic guitars. Or maybe the lines balance some of the sweetness of that sound.

The standout track on Winterland, though, is Snow Angels of Pigtown. The Jigsaw Seen has magically combined a lush R&B groove and trivial subject with wonderfully unexpected lyrical complexity. The sway of the music with its Motown inspired bass and guitar work proves to be the perfect setting for lines like:

Every time I hear the track, I smile. "When mercury takes a dive / That is the time these flightless wonders thrive." What a wonderful ode to the snow angel. This is a seasonal spirit I can get behind.

The nicest thing about Winterland is that it will still be listenable in January.
Posted by Jester Jay Goldman at 5:00 PM