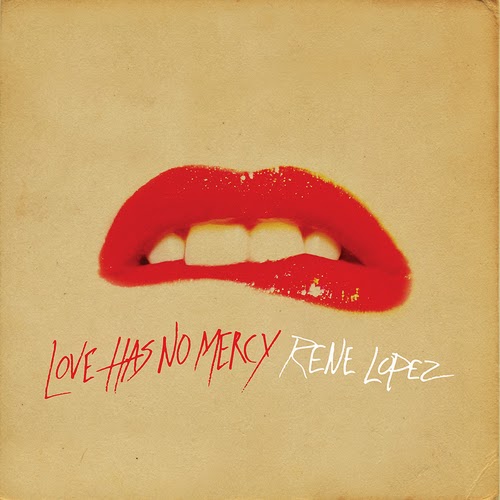 Rene Lopez continues spiraling in on his idealized target of electric Latin soul. His last release, Paint the Moon Gold,veered away from the funk to lurch toward R&B pop. On his new EP, Love Has No Mercy, '70s pop has given way to the hybridized disco funk of that same era. The album isn't a one trick pony, but Lopez is more dedicated to club-style rhythms on this release. The first half explores this borderland with a series of tracks that wrestle with co-dependence, love withheld, and unbalanced relationships."I Won't Love You Less" lies directly between the two genres. The sparse arrangement, the harmony vocals, and ringing keyboard fills are like the bright, spinning reflections of a mirror ball, while the crisp rhythm guitar suggests the chill nonchalance of Bowie's Thin White Duke and the steady, syncopated beat has a foot in both worlds. The choppy guitar bobs and weaves with nervous energy and Lopez's voice is strained to a falsetto whisper as he sings his unconditional love. His serene tone suggests that he's an ecstatic martyr to his chosen one's fickle whim: "You can lie and cheat and leave me cold / I won't love you less, I won't love you less / you can throw your stones and break my bones /I won't love you less, I won't love you less." From here, he wanders through electro-pop dance beats and Latin flavored disco before reaching my favorite track on the album.

The title tune is a duet with Carol C , and the two create a playful interaction that frames the song as a debate between the sexes. They share the chorus tagline, but the verses show how far apart they are. Drawn like moths to the flame, the two can only agree that, "Your love has no mercy, but I like it." After the break that summarizes the positions as, "Love-lust and love-love," Lopez takes a pseudo-rap turn,speak-singing his way through his lines with an expressive tone that maintains a nuanced tension. Meanwhile, the track is anchored by a snaking baseline and fenced in by stereophonic flickers of choppy guitar. Between the volley of vocal exchanges and the insistent dance beat, "Love Has No Mercy" is Lopez at his best.

From here, Lopez settles into a chain of solid funk pieces, with the fun attitude of "Lovegod", the Prince driven ''City Streets Are Dead Tonight", and the loopy electro funk of "Show Your Light". These are all strong, dance-friendly songs, but none of them follow a set formula. Even better,
Lopez adapts his singing style to each tune to flesh out the right character. Love Has No Mercy is another step towards perfecting his vision of electric Latin soul. The Latin element may be a bit restrained compared to earlier releases,but the music still calls you to surrender to the syncopation and dance.
Jester Jay Goldman at 6:27 AM
Share