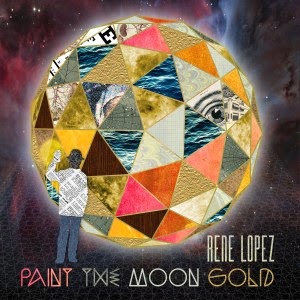 My first taste from Rene Lopez was 2010's People Are Just People (review), which celebrated his R & B and soul roots. A year later on E.L.S. (review), Lopez reinvented himself and claimed his own genre, "electric Latin soul".  His most recent release, Paint the Moon Gold, bridges the two sides, picking up on pop influences and toning down the funky club beats, but still holding fast onto Latin textures.

Lopez introduces himself on the opening track, "Purpose and Place". Latin percussion and a restless keyboard vamp provide a background to this autobiographical journey. From Spanish Harlem to his father's record collection, he recounts his influences, casting them as signposts that led him to his calling as a musician. The personal perspective he takes here is a good example of how Lopez approaches most of his songs. Although the arrangements are fully developed, he remains true to his singer/songwriter roots by dressing up his personal experiences with just the right touch of evocative metaphor. "Steal Your Love" is typical, elevating a romantic obsession into a bodice ripping conquest. A flute winds its way through the insistent rhythm, adding an air of exotic tension. The instrumentation is solid but he could easily carry the tune with nothing more than a solo guitar if necessary.

Like People Are Just People, this album is full of retro sounds, this time reaching more for 1970s pop than classic soul. This gives the project a familiar feel, especially on easy flowing tunes like "Just a Man" or "Don't You Change your Heart". That's not a bad thing, but it can become easy to take the music a bit for granted and not get as deeply engaged. Almost as though he recognizes this, "Your Soul Is In Danger" breaks the pattern and refreshes the listening experience. Except for occasionally intoning the title through a veil of reverb, the song is an instrumental, but the mood is unique for Paint the Moon Gold. The shaker beat and weird echoes push the tune into the strange and even when a more focused jazzy groove starts up, the sinister aura smiles in from the edges. It's possible to treat the piece as a bit of camp - his own laughter on the track indicates that he gets the joke - but I could also hear it as a tip of the hat to Dr. John's "I Walk on Gilded Splinters", using horns instead of the choral backing vocals. In any case, the change-up pulls you out of complacency.

Paint the Moon Gold rises from this dark interlude and closes out with a tight, upbeat run of songs: from the soulful sway of "Midnight Love" through the danceable electro-funk of "Come Along Now" to the chill soul-revue of "Hey Papa". Lopez has put together a solid collection that will click for a range of audiences. It blends pop, soul, and funk, all spiced by a generous serving of Latin rhythms. While it doesn't push as many boundaries as his last album, I think that Lopez is finding his most natural voice.